Rhinitis occurs when the interior lining of the nose becomes inflamed. A runny nose, sneezing, and congestion are common symptoms of rhinitis. The most common causes of rhinitis are the common cold and allergies. Bacterial infections, surgery, and chemical exposures can also lead to rhinitis and its bothersome symptoms.

Have you asked yourself, "How do I find an ENT near me?"
If you have then contact the expert team at Atlanta Institute For ENT.

Rhinitis is typically classified as acute (lasting less than two weeks) or chronic (lasting longer than two weeks). Most cases of acute rhinitis are caused by viruses or infections. Seasonal allergies may also cause an acute case of rhinitis but typically lead to more chronic, long-lasting episodes of rhinitis unless treated. Chronic sinus infections can also lead to chronic rhinitis (a.k.a.chronic rhinosinusitis). 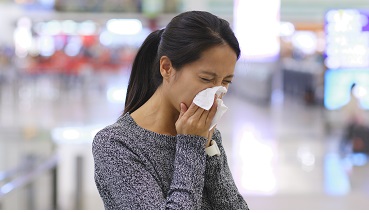 Allergic Rhinitis
Allergic rhinitis is a condition that develops when the body's immune system overreacts to substances commonly found in the environment. These substances, also called allergens or triggers, often include dust, mold, various species of trees, grasses and animals. Allergic rhinitis symptoms typically include sneezing, stuffiness, a runny nose, and watery, itchy eyes. Individuals with allergic rhinitis may also have other symptoms, such as wheezing, coughing, dark circles under their eyes, fatigue, and headaches. Symptoms may be seasonal or last all year long.

Vasomotor Rhinitis
When nasal congestion (stuffiness), sneezing, and a runny nose occur on a chronic basis but allergies are not present, vasomotor rhinitis may be the cause. Vasomotor rhinitis occurs when the nose reacts to strong irritants such as perfumes, pollution, dust, and even spicy foods. The condition is often worse in drier climates. The inside of the nasal passages often turn bright red or purple and inflammation often occurs in the sinuses, as well. While infection is not the cause, those with vasomotor rhinitis may be more prone to infections in the nose and sinuses.

Infectious Rhinitis
Rhinitis caused by infection are usually caused by viruses, typically the virus that causes the common cold. Symptoms often include fatigue, congestion, cough, postnasal drip, sneezing, a low-grade fever, and a runny nose. Many over-the-counter (OTC) therapies along with rest and fluids can help the symptoms of viral rhinitis. Occasionally, a bacteria will infect the mucosa of the nose and sinuses, which causing a bacterial infection. In these case, antibiotics may be necessary.

Chronic Rhinitis
When rhinitis is caused by an infection or inflammation and extends beyond two weeks, it is termed chronic rhinitis. Other medical conditions and illnesses can lead to chronic rhinitis, too. These include conditions that involve the production of inflamed lesions (granulomas) that can destroy cartilage, bone and soft tissue. Illnesses such as blastomycosis, histoplasmosis, leprosy, syphilis, and tuberculosis can also predispose individuals to chronic rhinitis. Being surrounded by air irritants in a dry climate can also result in chronic rhinitis. Nasal obstruction, thick foul-smelling, pus-filled discharge from the nose, crusting and frequent bleeding can occur in chronic rhinitis.

Atrophic Rhinitis
A form of chronic rhinitis that causes the mucous membrane to thin and atrophy is known as atrophic rhinitis. In atrophic rhinitis, the lining of the nasal passages become dried out because the membrane is so thin. This often occurs in both older people and those with a condition called "granulomatosis with polyangiitis," formerly known as Wegener granulomatosis. Normally, the lining of our nostrils have cells that secrete mucus and have hairlike projections to move dirt particles out. In atrophic rhinitis, however, these cells are replaced by cells like those normally found on the outer layer of our skin, which do not secrete mucus or have hair-like projections to keep debris out of the sinuses.

Treatment of rhinitis depends, of course, on what is causing the rhinitis. If you find that you suffer from symptoms of rhinitis, contact our office today for a detailed evaluation so that we can find the source and appropriate treatment for your condition.