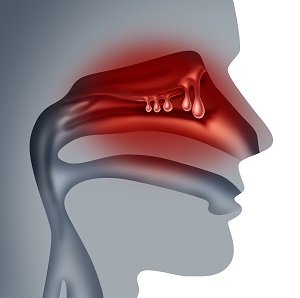 Sinuses are hollow areas in the bones of the face. Inside the nose and in the sinuses, small abnormal growths of skin and tissue can develop and obstruct the nasal passages. These growths frequently end up being “nasal polyps,” which can develop in any of the sinuses and in both sides of the nose.  It’s not clear why people develop nasal polyps, but many people who have nasal polyps also have "chronic sinusitis,” a condition that can cause a stuffy nose, pain in the face, and discharge/mucus from the nose. Small polyps do not usually cause any symptoms, but large nasal polyps, or having a cluster of several small polyps, can cause some chronic congestion, pressure or even trouble smelling and tasting.

How can you find out if you have polyps or if polyps are obstructing your nasal passageways? Occasionally, a CT scan will be ordered to take images of the inside of the nose to get a better idea of if and how many polyps there may be. However, many otolaryngologists have a special instrument that allows them to look far up into the nostrils and identify any polyps in the nasal cavity. Some polyps may be too far up to see, or the actual amount may be difficult to see if there is a lot of them.

The procedure to remove recurrent polyps or particularly large, obstructive polyps involves the use of an endoscope, a small nasal telescope with specialized instruments that remove nasal polyps without making incisions or disturbing normal tissue. These procedures are often performed an outpatient basis, meaning you do not usually need to stay overnight in a hospital.  Surgery to remove nasal polyps can significantly enhance an individual’s quality of life by improving breathing and one’s sense smell, among other things.