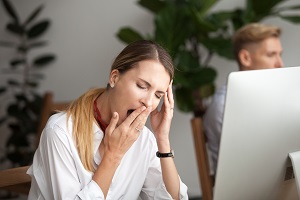 Obstructive sleep apnea is a serious medical disorder seen primarily in men. Unfortunately, this is frequent overlooked as “normal” snoring. This condition occurs when obstructions in the nose and throat block the ability to breathe. This can cause several symptoms including:

1. Gasping for air during sleep
2. Witnessed apnea (pauses in breathing for at least 10 seconds)
3. Waking up tired, even after a full night’s sleep
4. Feeling sleepy during the day (often while at work or driving)
5. Irritability or short temper
6. Problems with concentration or memory
7. Medical conditions such as high blood pressure and heart disease

Snoring is caused when there is narrowing of the normal airway. Because of a phenomenon known as the “Bernoulli Effect,” air flows faster through a narrowed passage, similar to how water sprays faster and farther when you put your finger on the tip of a garden hose. This faster flow of air causes high frequency vibrations of the soft tissues of the upper airways (nose, nasal passages, paranasal sinuses and larnyx), resulting in the characteristic sounds of snoring. Other snoring patterns and sounds can occur if the obstruction is located in the back of the throat or windpipe.

Obstructive sleep apnea occurs when there is an actual obstruction of airflow and no air enters the lungs. This usually occurs during deep sleep, due to relaxation of the muscles of the throat that keep the airway open during the day. The body senses the inability to breathe and tries to open the airway by bringing the brain out of deep sleep to restore muscle tone and clear the airway (resulting in gasping and frequent arousals at night). Given the choice between deep, restful sleep and oxygen, the body chooses oxygen. The resultant disruption and lack of deep, restful sleep results in the brain craving sleep during the day (leading to feelings of tiredness or even falling asleep during quiet periods).

Left untreated, obstructive sleep apnea can have serious health and safety consequences. There is an increased risk of automobile accidents because of the impaired concentration and attention deficit that is caused by the apnea. In fact, the risk is the equivalent of having three alcoholic drinks before driving! Long term risks include high blood pressure, heart disease, heart attack, stroke and sudden death. One study show that over 50 percent of men with untreated obstructive sleep apnea suffer a serious health condition or even death within 10 years of the diagnosis.

If you have any of the symptoms of sleep apnea, a physical examination with your doctor or ear, nose and throat specialist is certainly warranted. Your physician will perform a detailed history and physical examination including an endoscopic examination of the upper airway. He will also recommend a sleep study (overnight polysomnography) to objectively quantitate the severity of the disease. Based on his finding, he will recommend one of four treatment options:

The first involves weight loss, avoidance of sedatives (including alcohol, antihistamines and sleep aids), and sleeping on your stomach or side (not your back). Although this is simplest treatment option, it often does not correct the problem.

The second option is the use of CPAP (Continuous Positive Airway Pressure). This involves wearing a mask at night that is attached to an air blower. A gentle, steady stream of air to the nose and throat keeps the airway structures from collapsing and thus prevents obstruction of breathing. The pressure is customized to your needs, but has to be used every night to be effective. CPAP offers a high degree of success in treatment and avoids surgery. However, it may be uncomfortable and sometimes patients are not willing to wear it every night.

The third option is utilizing oral appliances to keep the tongue and/or the jaw forward to prevent airway collapse. Placing breathing strips on the nose at night may also help improve airflow to the nasal passages. Consultation with a dentist who specializes in these appliances can help fashion the most appropriate appliances for you.

The fourth option is surgery to improve the airway in the nose and throat. A septoplasty (nasal septum repair) to fix a deviated nasal septum will improve breathing through the nose. Incisions are made inside the nose. There is usually no bruising or swelling on the outside of the nose. Septal bone and cartilage are straightened to allow air to flow freely through the nose.

Reduction of the turbinates (soft tissue located opposite the septum) may also improve airflow. A combination of these procedures results in a larger diameter of the nasal passage and improved flow. Physics state that laminar flow is a fifth power exponential function of radius. In simple terms, that means if the radius (or width) of the nasal passage is doubled, airflow will increase 32-fold! Usually, the improvement is not that dramatic, but this does illustrate why even a slight enlargement of the nasal passage will have beneficial effects on nasal breathing.

Tissue in the middle of the throat may also be “trimmed” in a procedure called uvulopalatopharyngoplasty (UPPP). This procedure entails removal of the tonsils, the uvula (the soft flap of tissue that hangs down at the back of the mouth), the adenoids and part of the soft palate to make the airway wider and allow air to move through the throat more easily. UPPP is painful (for about two weeks) and is performed in a hospital. The success rate is slightly lower than CPAP. The upside is if this is successful, no further intervention may be required.

In addition to these procedures, your physician may also perform a tongue base suspension. The back of the tongue is also a structure which can collapse into the airway. A simple sling of suture, anchored to the inside of the jaw bone, is placed underneath the lining of the floor of the mouth and tongue. This is usually not noticeable during the day, but at night, it prevents the tongue from falling back into the airway.

Obstructive sleep apnea is a serious disease and not something to ignore. Please call 404-257-1589 to make an appointment for a diagnosis and to learn about treatment options.