Allergy tests are used to determine the specific substances that cause an allergic reaction in an individual. They may also be used to determine if a group of symptoms is a true allergic reaction (involving antibodies and histamine release). Some food intolerances, in which there is an inability to digest a food because of lack of appropriate enzymes, mimic allergies. Certain drugs, such as aspirin, can cause allergy-like symptoms, but without the formation of antibodies or the release of histamine.

Skin tests involve two steps and usually take up to two hours. The first step is the skin prick test which tests for pollens, dust, molds, pets and foods. This involves a small prick on your skin, usually on the inside of your lower arm. This screening test helps your physician or allergist identify any severe allergies, ruling out the need for further testing for these allergies in the second step. This test result is ready in about 15 minutes. 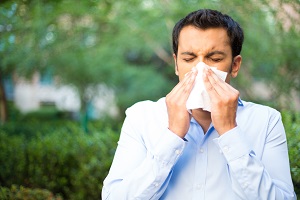 When a substance does not cause a reaction in the skin prick test but is still suspected as an allergen, the second step is done: intradermal testing. This test involves taking a diluted amount of an allergen and using a small needle to inject it just below the skin surface, usually on the back of the upper arms. Intradermal testing is used to diagnose mild to moderate allergy, is particulary suited for mold sensitivity, and confirms true negative allergy. Test results are available immediately following testing, along with counseling or treatment recommendations.

RAST testing is a blood test to determine what substances a patient may be allergic to. RAST stands for radio immunosorbent assay. In certain circumstances a patient may not be able to undergo traditional skin testing, and a RAST test would be performed instead. This might be done, for instance, if a patient was taking a medication called a beta blocker (often used for blood pressure and heart disorders) and his or her primary doctor is not able to change the medication even temporarily to allow for skin testing.

Which type of allergy testing is best-suited for you will be determined by discussion with your ENT doctor during your consultation.