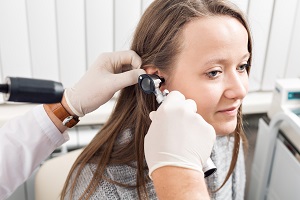 Ear infections occur when bacteria or viruses affect the middle ear (the area on the inside of the eardrum) or ear canal. Otitis media is the term used when there is a buildup of fluid and inflammation in the middle ear, the space beyond the eardrum. When the ear canal is infected, it is called otitis externa. Although both adults and children get ear infections, children are much more likely to get recurrent infections and have complications.

Middle Ear Infections
Middle ear infections are frequently associated with upper respiratory infections and allergic rhinitis (a.k.a. hay fever) and can follow a simple cold. Ear pain and even decreased hearing are common symptoms of middle ear infections. Most ear infections are caused by viruses, which do not respond to antibiotics and often require supportive therapy with OTC pain relievers, rest and fluids. Those that are caused by bacteria can be treated by antibiotics and usually resolve within about seven to ten days.

Ear Tubes (Tympanostomy)
When middle ear infections become a frequent occurrence, they can become difficult to treat with antibiotics over and over. Tympanostomy, also known as ear tubes, is more common in children because the tube that connects the open space behind the nose to the middle ear is smaller in children and may not drain as well as it does in adults, thus leading to more frequent fluid accumulation and infections.

Frequent middle ear infections can lead to decreased hearing and speech problems over time, which can be detrimental to a child’s education and social development. They can also cause long-term damage to the eardrum. There are both benefits and risks of ear tube placement and each case is unique. It is important to discuss all of the benefits and risks with our specialists at Atlanta Institute for ENT before deciding what is best for your child.

Ear tubes may be considered if the following factors are present:

Outer Ear Infections
Outer ear infections cause swelling and pain in the ear canal. The ear canal is the tunnel part of the ear that goes from the outside of the head to the eardrum. Otitis externa is also frequently known as “swimmer’s ear.”  They don’t only occur in those who swim; the bacteria that commonly cause the infections thrive when water stays in the ear canal for too long. The symptoms of otitis externa often include pain when the ear is pulled or moved, itching, fluid draining from the ear, and decreased hearing. Medicated ear drops are the mainstay of treatment. Medicated drops allow the medication to topically penetrate the infected skin and clear up the infection and/or relieve inflammation and pain.

Is there anything that can be done to prevent ear infections? In a word, yes. First, do what you can to prevent getting infected with common colds or other illness. You and your children can do so by washing your hands frequently and thoroughly.  It’s also a good idea not to share eating and drinking utensils, even if the other person doesn’t appear ill.  Stay home from school or work if you are ill and cover your mouth when you sneeze or a cough.  Secondhand smoke has been proven to increase the risk of ear infections also, so stay away from tobacco smoke as much as possible.  Get plenty of rest and stay well hydrated. Vaccines also prevent ear infections, so be sure to keep your children immunized according to the recommended schedule.  Flu shots and pneumococcal vaccines may also help prevent ear infections.